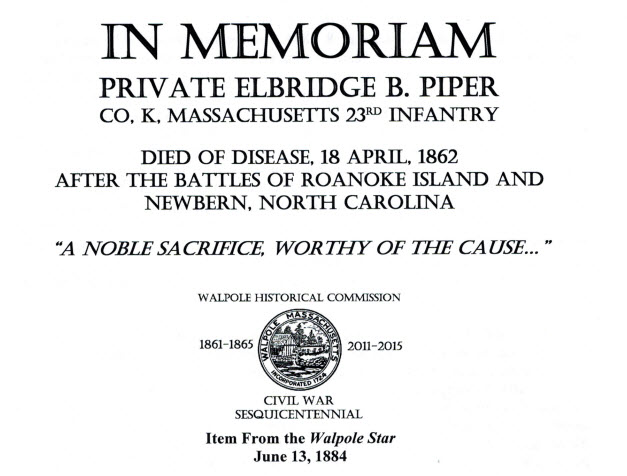 Pvt. Piper Memorial: Walpole's first to die during the Civil War In the words of his contemporaries  (please click on link above) from the on-line archive at the Walpole Historical Commission Walpole, Massachusetts
Read more
October 14, 2016 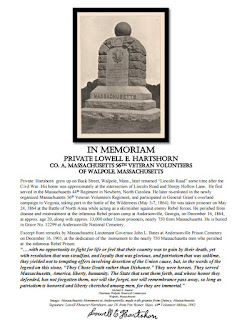 The Private Hartshorn Memorial  located on the Town of Walpole webpage. Peruse the whole document, because it links to the booklet about the Dedication Ceremony of the Massachusetts Monument at Andersonville.
Read more
October 14, 2016 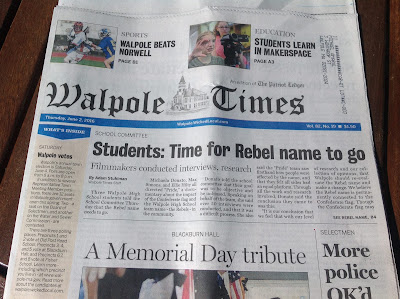 Congrats to the students at Walpole High School..when will the adults figure this out?
Read more
October 13, 2016 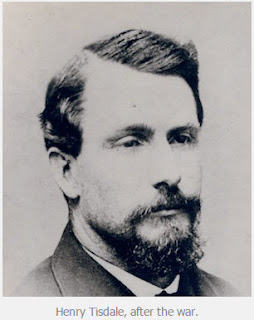 The online Civil War diary of Henry Tisdale , born in Walpole, Massachusetts. Sgt. Tisdale, of Co. G, 35th Massachusetts Infantry, enlisted on July 10, 1862. He was taken prisoner at the Battle of North Anna, Virginia, on May 24, 1864, at the same time and place as Walpole's only POW to die in captivity: Private Lowell E. Hartshorn. Page through the Diary to May 24, 1864, and you will have an eyewitness description of how two Walpole boys were captured by Rebel forces at North Anna.  His Diary was written during the war, including passages of his imprisonment at the infamous Rebel Prison at Andersonville.  Here is a link to a brief article on the New England Historical Society webpage: Henry Tisdale, Dedham Grocery Clerk Fights Civi l War
Read more

August 12, 2016
The graves of the 13,000 Union Soldiers at Andersonville who chose Death Before Dishonor.... Heroes All Please do not click on the photo above In my research on Walpole's Private Lowell E. Hartshorn who died at the infamous Rebel Prison at Andersonville, Georgia in 1864, I came across the story of the Reverend H. Clavreul who, during part of 1864, assisted the Reverend Father Whelan in administering the last rites and penance of the Catholic church to dying Federal prisoners confined at the prison. Apparently few religious persons wished to enter the prison except for the Catholic priests. Reverend Clavreul kept a record of the hundreds of men he administered last rights to, as well as confessions, and a few baptisms. Many of the men were of Irish descent, most of them straight from Ireland itself. Here follows the Reverend Clavreul's partial list of Irishmen who chose the side of "Death Before Dishonor" . They refused to change sides to the Rebel Cause, some
Read more
July 19, 2013
A Quiet Corner of Massachusetts I recently scheduled a Friday off from work with short notice, planning to use the good weather for a motorcycle day trip to the “Quiet Corner” of Northeast Connecticut. Known for its rural setting, farms & vineyards and beautiful scenic roads, it is one of my favorite day-tour destinations.  As I was preparing to head out, something was on my mind. I knew that there was a special place nearby that, though the roads may not be as rural or scenic, the final destination is a little piece of paradise. As I started to saddle-up the old Moto-Guzzi, I decided to change my plans. This little tour was going to be to a quiet corner of our own: The Walpole Town Forest. Earlier this spring I was invited by Dick Adams of the Walpole Town Forest Committee to view work he and his colleagues had done at the Blake Memorial Site. Located in the Town Forest along the main trail behind John Turco Field at the High School, the Memorial Site is dedicated to the Blak
Read more 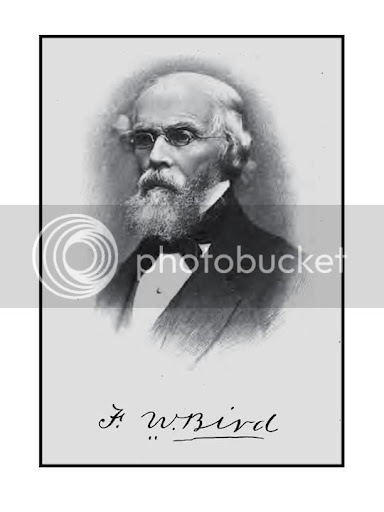 Francis W. Bird....noted local manufacturer from East Walpole, local and state politician. Founder of the "Bird Club" of Cornhill St., Boston . Friend of Senator Charles Sumner , noted "Freesoiler ", Abolitionist, and instrumental in promoting John Albion Andrew as Governor of the State of Massachusetts, who presided over the state during the Civil War, and who led the creation of African-American troops during the Rebellion. F. W. Bird's vision is a great lesson for the children of Walpole: to uphold the Declaration of Independence that declares "All Men Are Created Equal..." Suggestion: Always teach your children the truth about American History, Massachusetts History, and Walpole History. They will thank you in the future. Read this link to F.W. Bird's biography on Google book. Learn something about Walpole History, and how it shaped the future of the United States of America.
Read more
More posts